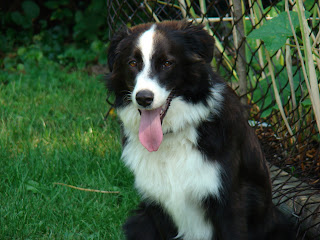 Chip’s Story
The day we met Chip he was a happy go lucky Aussie like most 9 month olds.
He was a little traumatized, well not a little more like he had the worst start in life tied up most of the time with little to no attention. 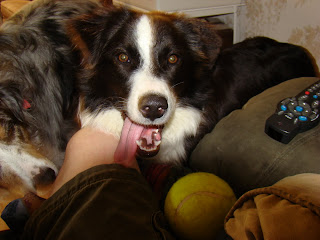 Driving home after picking him up he sat in Brigitte’s lap all the way home, she mentioned micro chipping and his ears went up and his head turned to the side so she named him Chip (much better than Motor)……..lol….I don’t think he seen so many cars before, with everyone passing he would follow it, if he kept it up he would of gotten whiplash……lol…… Our first night fostering Chip he spent on our bed (Another Aussie Blanket)….lol…. and he stayed on the bed the whole night.... A few days later in the van Chip seen a couple walking by and he went buzzurk going from front to back barking at them, it was like our very own car alarm but we were in the van, there not suppose to go off until you’re out of the van…lol….
Chip has this look and it’s like he has a smile on his face all the time. Over the next few days Chip came more and more out of his shell and started showing us what he loved to do most and that was play ball none stop, he even puts it in your lap. He’s even happy when you drop on the floor, whatever toy he places in your lap, it’s like all he cares about is that your giving him attention and he’s happy. He got our neighbor playing ball with him. Chip brings the ball over to the fence and stands up and drop the ball in his hands. 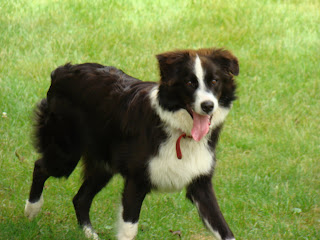 Chip was scared, like any rescue. He didn’t want you to touch his rear end, he’d lower his butt every time we tried to touch it, we kind of made it into a game thing when we would touch his back end and now Chip just looks at you with his smile and goes on.
Chip wakes me up every night around the same time by putting his head on the bed and sneezing to wake me up and let him out, and if the grass is wet forget about him going. He’s the only Aussie who doesn’t like to get his paws wet…..lol…
Like Razor, Chip just fit in with us so we just had to add him to the family.
So now we wake up with a Chipper smile.
By: Ed Eldridge (Foster and Forever Home)
Posted by Kim at 8:32 p.m.