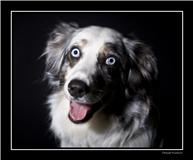 Tonka is currently 8,  he was adopted when he was 3 (2006).  Tonka came into ARPH after having been tied out for an extended period….. He emigrated to Canada from the United States (with ARPH)  and found his forever home here with us.  He likes to play the training game and has dabbled in obedience and rally, agility, skijoring and most recently is trying his hand at treiball.  He likes just hanging with his humans either on the couch or on a great hike in the scent filled forest. 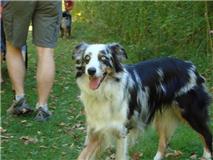 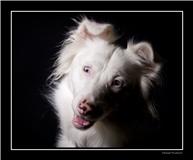 Lilah is 5 years old, our first foster dog for ARPH and our  first failure as fosters.  She arrived  in our  home in July of 2007 at one and a half  after having been in rescue for an extended period of time.  She was found as a stray at around the age of 6 months.  Lilah is athletic, interested in the world and excitable.  As a double merle  both her sight and hearing are affected to some extent,  but both are functional for every day life. She doesn’t know she has different capabilities.  Her limited vision (greater difficulty with tracking movement, limited field of vision) mean that her best activities are RallyO, Skijoring, playing scent games and tracking.  Tracking is her favorite for sure,  it allows her to use her fantastic doggy nose which inevitably leads her to food, a person with food or the possibility of food … her favorite.