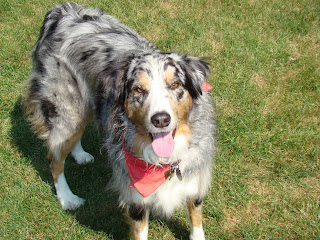 Razor’s Journey
The day I met Razor at the shelter he was scared and didn’t know what was going on, all he knew was nobody wanted him. At first he didn’t want anything to do with me and well a few treats later and he was ready to go outside in the cold for a walk. The drive home was a long one, all I could think of was this scared and a little over weight Aussie who just wanted to be loved, a few days later it was time to pick him up and bring him home. 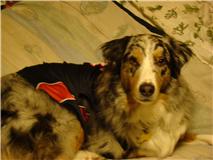 The first couple days fostering him was some of the funniest, we have one of those large floor pillows and Razor would walk up to it and knock it over so he could lay down, it didn’t matter where it was he would knock it over so he could lay down….lol…he would even push it around so he could see us and watch T.V…. Razor attached himself to our son Dillan for the first couple weeks; where ever he went Razor was following, night time Dillan had to sleep in a ball because Razor took the whole bottom of the bed. Razor even lets Dillan puts Basketball Shorts and Jerseys on him, Razor’s the first ARPH Basketball Player.
Over time Razor started following me and it didn’t matter where in the house if there was a door between us Razor was whining and if he couldn’t come with me he would go and pout in the corner or the screen door and watch for me and he’d stay there until I came home, treats would bring him out but as soon as he was done back in the corner or door to pout he’d go. So now all I have to do is look or touch him when he’s cuddling with the kids and he comes running. Razor is one of the most loving affectionate Aussie’s and is my shadow.
Because Razor fitted in to our family we knew he had to stay.
To this day Razor whines, pouts, and gives the saddest looks if he can’t come with me. 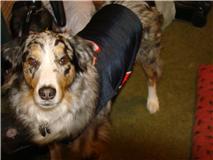