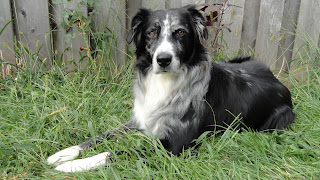 Rags to Riches
The year after my Australian Kelpie has passed away, we decided it was time for another dog. I searched and searched on the web every day for one that would fit our family. I found ARPH web site and did more re-search about the breed, since we didn't know anyone who has an Aussie.
We herd their nick name could be "Velcro" that is what we like and love.  So we adopted an Aussie in Oct 2009, he's true to nick name "Velcro". He lays his head on my chest, legs or any part of my body or my husband, he just "stick" to us.  So we decided to adopt another Aussie so he can have a brother to play with.  I had been communicated with an ARPH Representative, and she worked hard to find the perfect Aussie for us. We were email and told us there will be few Aussie’s from US and the right dog for us was believed to be coming. We are so happy! Couldn't wait for the day arrive.
This is Bonza, he came into our house on Jan 13 2010 at 11:35 pm with an Ontario Volunteer.  The volunteer transported Bonza (formerly Luther) along with 3-5 other Aussies from a "back yard breeder". He was scared; he just stayed in the corner of the front door of the house.  My husband tried to coax him out of the corner from few feet away by holding treats in his hand but Bonza would not move, our other Aussie bring toys and tries to initiate play. But all of this made him huddle to the wall more. So I told my husband give him time to settle down a bit. We brought him water but he wouldn't drink, after 30 minutes he's move away from the wall and lay down.  My husband put his hands out with a piece of meat (left-over steak) for him to sniff and eat.  He slowly reach for the steak and nibble at it, my husband back off and do the same so we can draw him away from the corner.  After 4th time, he let my husband & I touched and patted him on his head and back. Boy, oh boy! When my hand ran down his back, he's just bones underneath his fur. I think his weight was around 27 pounds. His pads on his paws had no callouses, if he when outside to do his business, the compacted snow-ice would cuts his paws.  We bought balloon "Paws" to put on him.  My red tri "Barnacle" would bring his toys and tried to make him play with him, but he just looked at Barnacle like he's crazy and walked away.
That was 2010 but look at him now! He's no longer a scare little dog.  He weighs in at 30 kg and big broad chest with long mane like a "body builder".  He LOVES his toys, he would rather play with his toys then eat. We couldn’t be happier with him!
We Love these Boyz, and they Love us.  I would adopt more if I have room for them.  They're wonderful dogs.
Cheers!
-Twee
Posted by Kim at 7:47 a.m.